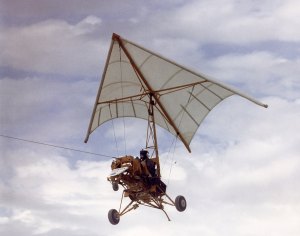 Over at Vintage Space, I’ve been talking a lot about landing methods and why splashdowns were never a long-term method of returning from space. Of all landing systems NASA ever considered, my favourite is the Rogallo wing – the inflatable controllable paraglider wing that promised to start a new generation of spacecraft but never got off the ground. I’ve just finished three articles that offer a complete, if brief, overview of the Rogallo wing.

First presented in 1960 as a landing method for the Mercury program, it was reconsidered and approved in 1961 as the landing method for the Gemini program. Wind tunnel, half- and full-scale drop tests were initially successful and suggested the system would be a viable step on the way to land landings in spaceflight.

In 1962, a training program began for the astronauts to learn to pilot the new vehicle. The Paraglider Research Vehicle or Paresev was built by X-15 pilots Milt Thompson and Neil Armstrong, the former of which oversaw the series of successful tow and drop tests that proved the system’s pilotability. (Pictured, a Paresev air tow test.)

But it wasn’t long before failed tests outweighed successful tests. Following failed tests, time pressures the looming Apollo program, and conflicts of interest from the contractor responsible for development of the paraglider, the was program was eventually cancelled in 1964, but not killed. NASA had spent over 165 million 1960s-dollars and wasn’t going to let the research go to waste. The paraglider was set to be part of Apollo, Apollo follow-up programs, and even the US Air Force’s space program, the Manned Orbiting Laboratory before it was finally deemed too problematic.

The Rogallo wing never once enabled a pilot-controlled land landing from space, but it nevertheless ‘lived’ a fascinating life!

Space historian, blogger, and writer.
View all posts by asteitel →
This entry was posted in Uncategorized. Bookmark the permalink.